There are an incredible variety of tours and experiences available on San Cristobal.  Just about everything that the Galapagos are famous for can be seen!

No visit to San Cristobal is complete without a trip to the highlands to visit the Tortoise Reserve.  Early morning is best (before it gets too hot).  The trail through the reserve has dozens of adult tortoises, native birds, lizards, and most of the local vegetation (carefully labelled for the visitor). 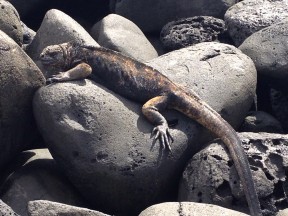 These giant lizards (often over 3 feet in length) are unique to the Galapagos.  You can sometimes see them from the boardwalk in town.  However, the local beaches support a much larger population including Peurto Chino (northwest of town) and Loberia (south of the airport). You are guaranteed to find them on the big rocks on the shoreline at Loberia. They are easily photographed but should never be disturbed (which is true for most wildlife).

The sea lions are literally everywhere. There are more sea lions in town than there are people.  The beach by the southern end of the boardwalk supports a huge population of moms, adolescents, and adorable pups.  The big males can be aggressive and are sometimes a nuisance when fishing.  The best way to observe these is on a snorkeling trip to Lobos Island which is about 7 miles north of town.  The trip is spectacular with loads of fish, turtles, and iguanas, but the sea lions always steal the show. 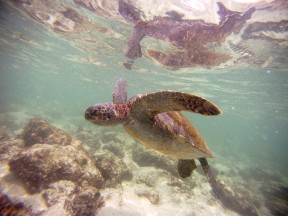 There is no better spot in the world to see so many giant sea turtles.  Some of the largest are easily 5 feet long.  The turtles lay their eggs on some of the more remote beaches.  They can be found off of most beaches, but Loberia at low tide usually has the most and offers the best chance for viewing.  The turtles are often found laying on the bottom in the shallows getting “cleaned” by cleaner fish.

These sharks are very common in the deeper waters (especially at Kicker Rock) and offshore.  They can be aggressive when feeding on sardines, but they offer no real threat to snorkelers, divers, or surfers.  They can sometimes be found in schools that contain dozens.  Other common sharks include big tiger sharks and hammerheads.

These beautiful little birds were a major motivation for Darwin’s Origin of the Species (which he actually published more than 20 years after his visit).  They can be found around town, in the vegatation on the beaches, and virtually everywhere in the highlands.  These little birds and the huge variety of sea birds make San Cristobal is a bird watcher’s paradise. 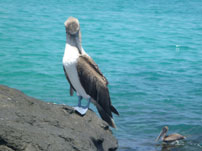 That’s right, they’re called “boobies”.  The jokes never stop and these pretty birds just don’t seem to care.  They can be found on some of the local beaches, but they are more abundant on the remote beaches.  And yes, their feet are blue!  They are not afraid to pose for a photo or two and can also be found feeding on sardines offshore.  By far the most popular t-shirt subject on the island.

Bird sea birds are everywhere including Frigates, several species of Boobies, Shearwaters, and several others.  All of the big sea birds are an important part of the offshore fishing experience.  It is common to see hundreds of screaming and diving birds marking a spot where the marlin or tuna have forced the bait to the top.  It gets everyone’s blood pumping!

This beautiful chunk of remote shoreline is a 20 minute walk or a 5 minute cab ride from town.  It is the best place to photograph the marine iguanas and is probably the best snorkeling spot on the planet!  The best time to go is at low tide and you will see sea lions, dozens of different species of fish, eagle rays, and more sea turtles than anywhere else on the island.  The snorkeling spot is a five minute walk north of the beach entrance (just follow the path).  Click here for a tide chart.

Beware, snorkeling here will proably change you forever!  There is a narrow protected cove between the island that supports a big population of very playful sea lions of all ages.  it is impossible to swim the length of the island without interacting with curious sea lions.  Some snorkelers have become so enthralled that they literally needed to be dragged back to the boat.  This is a great destination and can also be part of an excursion that includes Kicker Rock.

This is one of the more notable snorkeling and diving experiences.  It consists of two huge towers of compressed volcanic ash jutting out of the ocean 15 miles north of town.  The channel between the two towers typically holds loads of Galapagos sharks and an occasional tiger or hammerhead.  Various rays including eagle rays and manta rays an also be there.  Snorkeling through the channel is quite good, but so is snorkeling around the entire rock formation.

El Junco is a 2400ft tall extinct volcano with a huge fresh water lake in the crater. It is a 30 minute drive from town in the highlands. The climb up the volcano is relatively easy, but visitors should reserve enough energy to walk around the entire crater (nature path). The 360 degree view from the top is incredible and you can see the entire island on a clear day.

This beach is a 20 minute walk from town or a 2 minute cab ride (followed by a beautiful 10 minute walk). There is a stunning beach with great snorkeling and surfing. It also has a fascinating nature walk that leads to other secluded beaches and coves. Their is a jetty that protects snorkelers from the surf. Sea turtles, Sea lions, marine iguanas, and various sea birds abound (Frigates and Boobies).